The Abyssinian Cat is a very special cat. It is an animal of great intelligence and exceptional physical condition, who loves to climb, jump, run and generally stay active. He has the spirit of an adventurer and explorer, without a doubt. Stay with us and we will talk about the Abyssinian kittens so you know a little more and also we will tell you some curious facts about them.

Recent studies grant him almost certainly that it is one of the oldest breeds of cats. Its genetic evidence moves its origin to the coastal regions of the Indian Ocean and Southeast Asia, where merchants of the time established commercial routes with India and it is very possible that they had introduced them to Europe. 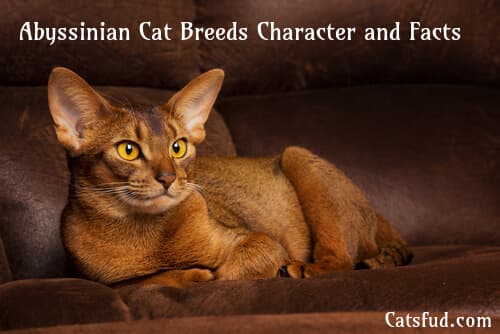 The first mention of this race takes place in 1872 in a British newspaper. We do not know for sure its concrete origin, but there are many legends and even myths that make reference to the Abyssinian cat could be the cat of the pharaohs themselves and worshiped for being close to the gods.

Why are they called Abyssinians?

On behalf of Abyssinian cats, it may be because the first specimen that was exhibited in London (called Zula) was brought directly from Abyssinia (Ethiopia). These look like a munchkin cat from a side.

The Abyssinian cat came to the United States in 1900 and Abyssinian breeding programs did not start until the 1930s, when more cats were imported from Britain. This fact could very possibly save the race, because during the Second World War, it was almost extinct and only 10 cats survived in those years in England. The breed was able to recover and today is a very loved cat and admired for its special qualities and its temperament. 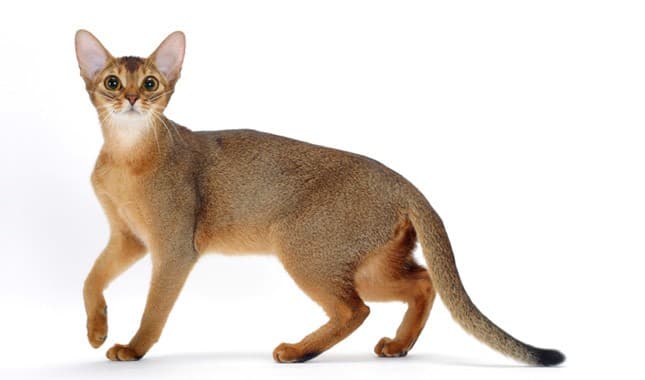 How is the Abyssinian cat

It is said that he is one of the most intelligent cats and has an alert and cheerful character. Abyssinian cat personality is like it loves to climb high places and explore every corner of the house, watch anything that catches his attention through the window. It has therefore a playful and very active nature, although it is possible that unlike other cats they do not tolerate a feline companion very well.

They are cats that demand a lot of attention and will let their human know. It is also proven that it is a race that loves to walk and can be taught to do it on a leash, in the same way that it would be done with a dog. So now you know the Abyssinian cat is very playful and tenacious with what he proposes, besides he loves to be the center of attention and will do whatever it takes to get it.

Health of the Abyssinian Cat

The Abyssinian cat can weigh between 3 and 5 kilos. You can live up to 15 years or more. It is a cat that suffers from health problems common to other cats but it is true that it has been shown to be more prone to suffer problems of kidney failure know more on cat kidney failure, neurological problems, problems in the joints of the knees as well as eye problems, due to the atrophy of the retina.

A disease to which it is especially prone, both the Abyssinian cat race with the Somali. This deficiency of Piruvato Quinasa (PQ) is a disease that is caused by the lack of said enzyme, causing a decrease in red blood cells, which leads to anemia in cats (lethargic cats with very little physical activity). This can manifest itself chronically and for a long time but if it occurs suddenly the life of the Abyssinian cat may be in danger.

Care of the Abyssinian 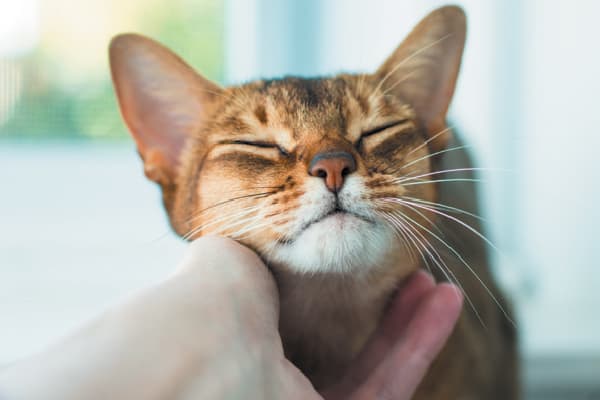 A Short and Fine Hair

They have a particularly thin and short coat that is easily cared for and just with a hairstyle several times a week, we will eliminate dead hair and help stimulate the secretion of natural oils that will keep it clean, shiny and protected.

It is advisable and to prevent any periodontal disease, brush your cat teeth at least once a week. Do not forget that accumulated tartar can generate a bad oral odor and cause the appearance of more serious diseases. The mouth is a delicate point in the case of Abyssinian cats.

It is advisable for cutting cat nails at least once every 15 days, especially if it is a cat that has no contact with the outside. If nails are very long, it happens that you can get stuck in the common furniture of the house as is the sofa, linings or fabrics. He is also an enthusiast of the scrapers so he will often look for him to renew his nails. If the cat is outdoors then it is better not to do it.

To avoid any eye infection, a weekly cleaning with a soft, damp cloth will suffice (there are special wipes for this). Also the ears which in this breed and savannah cat breed are especially sensitive. Always avoid the famous cotton swabs, which can cause injuries to your delicate ears. Keeping your sandpit clean is as important as all of the above and they are the most demanding cats in this regard.

As we have said before, Abyssinian is a very active cat that needs to move and space for it. If you let it out into an open and controlled area, it will be great for you to investigate and unleash your curiosity and energy. But you must be very careful, because it is a cat that is often stolen for the high price they can get. A harness and your care will be enough to not have any disgust.

We hope you have known a little more Abyssinian cat and that you found interesting. If you are lucky enough to share life with one of them do not hesitate to tell us your experience. If you found it interesting share it on your favorite social network. For more information on cats simply visit our Catsfud website.