Have you seen a jumping cat. The body of the cat is specially designed for hunting, that is it has strong teeth to chew meat, a very thin ear with which you can hear the sound of a mouse at 7 meters away and a sense of balance that neither the Better human equilibrist possesses. You can walk in very narrow corridors with total normality and without falling, but do you know how much a cat can jump?

Well this depends if it is healthy, a cat can jump up to five times its height. We could think that the higher, the greater the chances of the animal suffering some damage, but the truth is that it is the opposite. The higher the animal is, the longer it will be able to turn around. In fact it is easier to end up with a broken leg if it falls from a height of 1m than 3 or 4m. 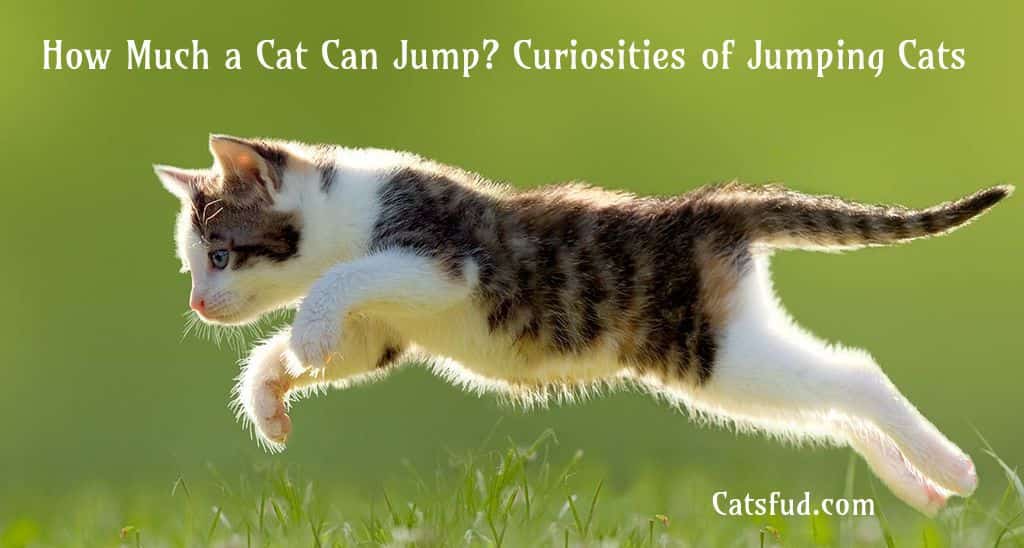 Cats are essentially arboreal animals, that is to say when they do not live in houses or in urban alleys, they tend to live in trees thus risking falling. Both cats and monkeys, reptiles and other creatures jump in search of prey and if they fail, the branches of the trees break or the wind pushes them and they can respond quickly so that evolution has made them supremely capable of surviving falls.

How Much Can a Domestic Cat Jump

You may wonder about how much a domestic Persian cats can jump, considering that it is a robust breed and usually a quiet behavior, but the truth is that these kittens also love to play and if their survival depends on the jump agility, these cats can jump a meter in height which is why you can rest assured that your cat will not escape and just use the jumps to go from one side to another.

How Can a Cat Jump So Much

The explanation for this lies in the anatomy of the cat. The skeleton of the cats is light and flexible but very robust in addition its spine gives them a great elasticity and thanks to the discs between the vertebrae are thicker. On the other hand the joints between the bones are less rigid which gives them greater mobility.

The legs of the cats are a fundamental part of the great jumps they can give, since the bones of the feet are elongated and only the tips of their fingers are in contact with the ground in a few words, it is as if the cats walked on tiptoe, this gives them a great push when jumping. 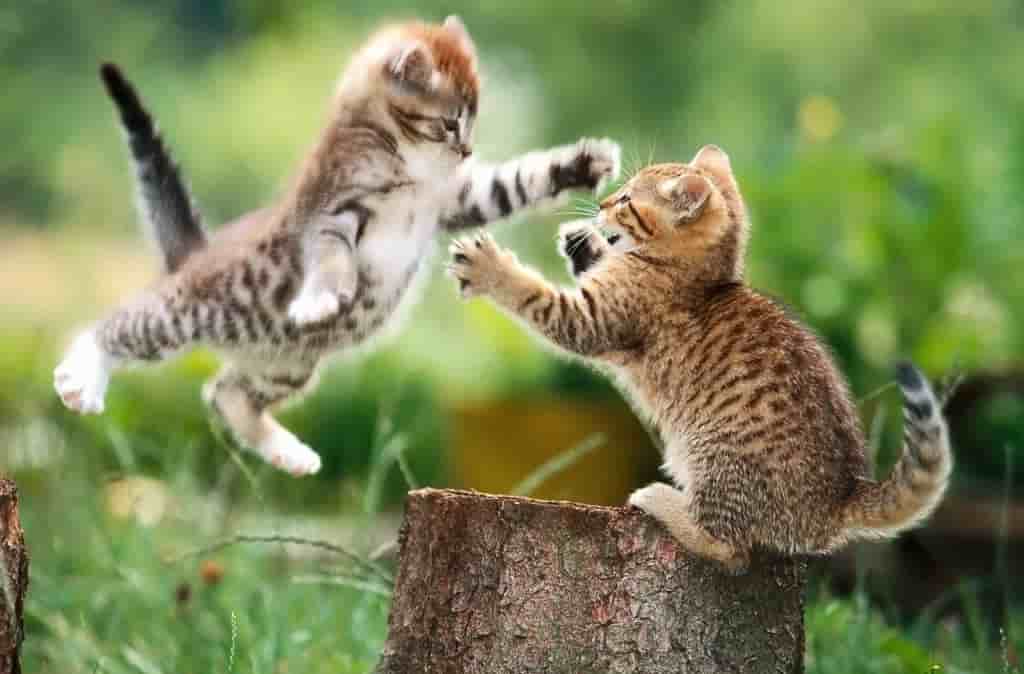 Also the muscles that do springs are much more flexible than ours, the felines can expand and contract as you would a bungee cord. Thanks to the fact that the fibers of the muscles contract rapidly, it generates a large amount of energy when the cat wants to jump.

It is a simple and predictable matter of physics the way felines can survive falls from great heights, besides being considered a great skill, since it is due to evolutionary biology and physiology, according to veterinarians and biologists. Obviously the community in general especially scientists are not interested in throwing buildings cats for experimental observations, science has been unable to study the percentage of felines that live after crashing on the floor.

5 Facts you should know if your cat likes to jump

Cats have large surface areas in proportion to their weight see the cat weight chart, so they fall at a lower velocity at higher altitudes than larger mammals.

They have evolved and developed their bodies over the years to allow them to survive falling trees, their natural homes.

Cats have the great condition of turning over if they have time to land on their legs.

As for their legs, they are long, muscular and extended under the body, instead of going directly down which allows them to cushion the fall.

Large numbers of cats that fall from large heights are still seriously injured and some die. 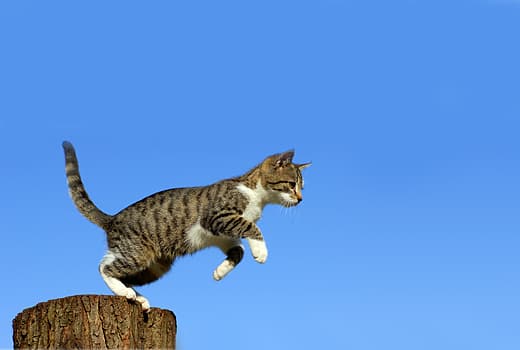 The kitten barely needs two weeks of life to be able to coordinate the information it receives from the different organs, especially sight and hearing and thus be able to be compared to an adult cat in terms of movement, flexibility and balance. Cats from very young make great movements that will later allow them to make great jumps.

Games, jumps, crazy and excessive races, climbs and descents are not only the antics of a fun and extremely active young but above all an essential form of learning and tuning, which allows them to develop these skills perfectly. These are done mainly by the Abyssinian cat.

To determine how much a cat can jump, it is necessary to understand that the body of the cat is small, strong, compact and very flexible and is composed of a muscle system in number of approximately 500, attached to the skeleton which is responsible for their movements. The most powerful are the muscles of the feline that make up the back room with which it manages to jump, pounce and run along with those of the jaw to make prey and bite.

The cats have a very peculiar articulation that of the shoulder, composed of scapula and clavicle, this being called floating, because it is thin and is not united in itself to the joint, in such a way that it remains independent in the muscle which allows movements of the shoulders without hardly restrictions.

The felines can develop in small spaces, slide on narrow passages and place their front legs one behind the other in a perfect straight line to walk through unlikely places.

The organ of balance of cats is located in the inner ear. It is known as the vestibule and consists of three semicircular canals that are filled with fluid (fluid from the vestibular scale) and covered by millions of tiny hairs.

When the cats jumping moves its head the liquid contained in the channels of the balance organ “splashes”, rubs the hairs and triggers a self corrective movement reflex, sending signals to the brain that the cat is able to identify to know the speed and direction associated with any of its movements.

After any sudden movement, jump, run, displacement of any kind, the cat usually shakes its head quickly for a couple of seconds to restore the liquid to its place, again being ready for any new corrective action.

The cat has 244 bones in total, this means that it exceeds 40 in our own number and of these 40 the majority are distributed between the column and the tail { know about cat tail flicking} mainly which justifies its elasticity and flexibility and even more if they like to jump.

In comparison with humans the disks that the cats have between the vertebrae are thicker, stretching and contracting much more than ours, allowing them not only to dampen the shock effect much better during the movement but to adopt unthinkable positions in our case.

As if all this were not enough, the cats jumping is able to jump without being imputed about 9 to 11 meters high, coupled with it the felines can increase the length of their body by 10 to 12% more just by stretching completely. You can see this in the ragdoll cat size.

The kittens make use of their brute force to jump and of the impulse obtained by the action of their powerful muscles of the back room which they complement with the helmsman action of the long tail, while with the front legs they recover all the balance in a Tenth of a second.

Our cat friends are very curious, but also very intelligent. So much so that they will only expend energy when they really feel it is worth it or in other words they will only jump in case they want to hunt food or toy or for survival. For more information on cats simply visit our CatsFud site.