Do cats Smile: The cats make us laugh all the time. But what about them? Do cats also laugh? Many of us believe that cats sometimes smile; and we may not be so wrong, scientists say. Did you know that the slow blink of a cat is a friendly feline smile? And that some types of purrs can be a version of cat laughter ? We reveal one of the best kept cat secrets: do cats smile? 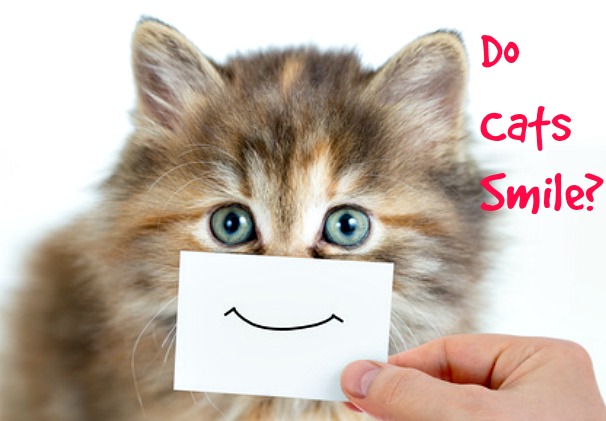 How Do Cats Smile? Feline Blinks

Cats make us laugh all the time. And the smile that these stars of the meow cause us is sincere, spontaneous and honest. You do not pretend to laugh when your hairy friend lies belly up on your computer. Not when you go to the bathroom and sneak in your underwear. Not when he shakes his ass before throwing himself on his toy. It just happens: cats are amazing, and very funny.

The cats make us laugh. But, and the other way around? Do the cats smile? Can the cats laugh? Is there a cat sense of humor

The smile of the Cheshire cat was able to crumble the Alice of Wonderland with his thoughtful reflections. But it also highlights how important it is for conscious humans who live with cats to know the signs that allow us to know if our kittens are happy or, on the contrary, sad.

The question is tricky: is there a feline smile? And if there is, can we say that it is a sign of feline happiness? “Humans love to see photos of cats that seem to smile because of the drawing that forms their mouth. But, unlike what happens with people, cats have not developed sophisticated facial expressions; on the contrary, they have evolved so as not to show their emotions in order to survive, “explains Nicky Trevorrow, feline behavior expert of the cats association Cats Protection.

“Do not disturb: happy kitten in the middle of the siesta” – Tuesday, a smiling cat.

Although this veterinarian does not believe that there is a catlike smile similar to the human one, she clarifies that we can know if a cat is happy reading his body language. The ears forward and upward are a good sign. “If, in addition, the cat’s pupils are not dilated and have an elongated shape like a groove, your cat is probably happy, ” says Trevorrow.

And on the contrary: a cat with pupils dilated in broad daylight, when you do not need to open them to capture the light, is likely to suffer pain, be angry or prepared to flee.

What then is the catlike equivalent of the smile? “A soft catlike blink is the most obvious way to know that the pussycat wants to be your friend,” says the veterinarian.

What If The Cats Do Smile? Many Believe It!

We like to think that cats sometimes smile. And maybe we are not so misguided. Ecologist Marc Bekoff believes that humans are better observers of animal emotions than we usually believe. “Scientists only confirm late what animal lovers intuit long ago by pure observation,” says the author of The Animal Manifesto (2010) and The emotional life of animals (2008).

According to Nicholas Dodman , the veterinarian behind Pets on the couch ( Pets on the couch , Atria Books, 2016), many scientists have underestimated the range of emotions that animals can feel. “Today we have understood that dogs and cats are not only capable of experiencing primary emotions, such as fear, sadness, anger or happiness; they are also able to experience some so-called secondary emotions, such as jealousy and shame; and they are even capable of expressing them. ”

And does Dodman believe that cats smile? At least, do not rule it out. “Cats have a concave curve shaped mouth, so it is difficult to identify a real smile in them: but cats are emotionally sensitive, they learn and they are certainly very emotional!” He says.

Is The Purr Of the Cat A Feline Laughter?

If you think your cat smiles at you, you are not the only one. “I admit that I like to think that cats smile. Some also have marks on the snout that create a gesture very similar to the smile of humans, even more combined with the smile of their eyes, “admits the cat veterinarian Skip Sullivan, author of the feline scientific and practical manual Why Cats Do not they get bald? ( Why do cats do not go bald , Lyons Press, 2008).

But there are more cat signs that we can interpret as a smile so we can say do cats smile a lot. And, in this case, rather like a sweet laugh: some scientists believe that certain feline purrs can be considered a version of cat laughter. “If it is true that there are cat purrs related to pleasure and the release of pleasurable chemicals to the brain, it is reasonable to think that these purrs can be a feline laugh,” says psychiatrist Jeffrey Burgdorf , who has been studying the signs of happiness in different animals.

Cats purr to communicate. And purring (like other low-frequency vocalizations in animals ) is often associated with positive social interactions: puppy care, grooming among cats, relaxing moments and friendly interactions.