Exotic Shorthair Cat: Calm and friendly, the exotic shorthair cat, or exotic shorthair, resemble the Persians, except for their long fur, which is genetically justified, since they are the result of mixing between Persians and Americans with short hair and, also, of British shorthair.

This particular race combines vitality and tranquility in equal parts, being the ideal pet of families with children, as it adores life at home and spending hours and hours of mimes and games. So, if you are thinking of adopting an exotic cat with short hair, in Catsfud we tell you everything you need to know, its characteristics, care and possible health problems. 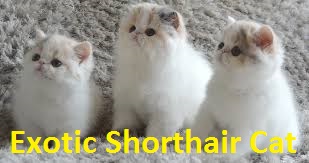 Let’s get to know a little more about exotic shorthair cat:

Origin Of The Exotic Short-haired Cat

As already mentioned, exotic shorthair cats come from the cross between Persians with Americans or British shorthair. This hybridization has given rise to a breed that achieved fame in the 60s and 70s. Thus, although it was consolidated as a breed in 1967. It was not until 1986 that the FIFE officially recognized it as a breed. Establishing the standards of the same. We are, therefore, facing a relatively new breed of cats, whose popularity is far from being as much as that of the Persian, but nevertheless the lesser need of time and effort to maintain its fur is causing it to gain many followers to it.

It is said that the first person to make the crossing between an American shorthair cat and a Persian was Jane Martinke. Who was a judge of feline breeds and got the CFA to create a differentiated category for these cats. Since until then they were had considered a variation of the Persians. Debuting the following year in exhibitions in which they were endowed with the name of exotic cat with short hair.

Like that of the Persian, the head of the exotic short-haired cat is flat and flattened. Not protruding its snout and presenting a rather wide skull, with a short an wide nose, large and open holes. His head, like his forehead, ears and eyes, is rounded. Their eyes are of an intense and pure color, normally of a colorful one in agreement to the one of its fur. For example, they are usually gold or copper, except in the golden chinchilla varieties, since the specimens that have this mantle tone have green eyes, or in the color point or white cats, which have blue eyes. 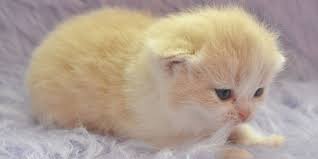 There is a classification of exotic cats with short hair that differentiates them according to how short their faces are. The traditional specimens would have a flatter snout and a longer nose than their congeners classified as extremes, the latter being the most prone to suffering from the mandibular and respiratory pathologies of the Persians.

Of medium build, its weight ranges between 3 and 6 kilograms. Its legs are short and like the rest of the body are broad and robust, with a marked musculature. Its tail is short, rounded and thick. The coat of the exotic short-haired cat, despite being longer than in the rest of short-haired breeds, is far from reaching the length of a Persian. All Persian mantles and patterns, both solid and bicolor, are accepted .

This breed is ideal for families, being considered as the most familiar and affectionate feline breed. Perhaps this is why loneliness is highly desolating, affecting so negatively that it can cause various diseases. Due to this character trait and the personality of the exotic short haired cat, it is crucial to teach him to manage loneliness.

Following the temperament of the exotic cat with short hair, we can say that it is a calm and very docile feline, so it will not be difficult to educate him and even get him to learn some tricks. Likewise, it is an intelligent feline, faithful and, in general, of easy coexistence. 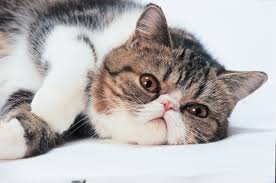 In addition, it takes great with other animals, so it is the perfect companion to live with other pets, whether other cats, dogs or even rodents like rabbits.

Care Of The Exotic Shorthair Cat

Among the attention we should give our exotic cat with short hair is a regular brushing of his coat. Despite not needing as much time and care as the Persian because the fur of this is longer and leafy than the Exotic. It still needs to be brushed to avoid hairballs. Besides that it will not fill our furniture and clothes with the hair that it gives off. For this, we will need a brush suitable for the length and characteristics of its mantle. Thus, brushing will be a pleasant moment for our pet, who will wear a beautiful and shiny coat.

In turn, both internal and external deworming must be carried out. Especially in those animals that have access to the outside or that have recently been adopted. This way we will avoid and end up with infestations that can bring many health problems to our beloved exotic kitten with short hair. In addition, as in all breeds, food must be taken care of and provided with an adequate and balanced diet to ensure that our cat is healthy and strong, as well as providing adequate environmental enrichment, with toys and scrapers. This last point can help us a lot to keep the cat entertained in our absence, since, remember, it does not tolerate solitude very well.

Finally, within the care of the exotic cat with short hair, his eyes are watery enough. So it is recommended to clean them with a sterile gauze moistened with physiological serum on a regular basis.

The exotic cat with short hair is usually healthy and robust. However, different issues regarding its health should not be overlooked. Because its snout is flat and short. The exotic ones can present respiratory alterations own of the breeds of short face, nevertheless. The number of cases is noticeably smaller than in that of their predecessors the Persians. 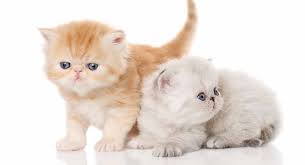 Excessive tearing of your eyes can cause the eye area to oxidize, being a source of infection. Therefore, we must be quite aware of their eyes and clean them properly. In turn, they are relatively prone to suffer hypertrophic cardiomyopathy, which is due to an incorrect development of the heart.