Peterbald Cat. It is a cat of Oriental appearance but with a peculiarity, it does not have hair. Despite his short journey, the race is over fifteen years old, the Peterbald is already recognized by the main feline associations and is gradually increasing the sympathies of the public that does not stop seeing it as a different cat, stylized and elegant.

The Peterbald race originated in 1994 in St. Petersburg, Russia. The idea of ​​the creation of the Peterbald race was conceived in 1993 by Mrs. Olga Mironova, a well-known judge, and admirer of the felines in this country; that he came up with the creation of a new elegant, and bare cat totally different from Sphynx. The base of the breed was originally planned by the experimental breed of cats of the Siamese breed and/or Oriental of modern and light type, with specimens with a spontaneous Russian mutation for cats with lack or loss of hair that occurred in 1986. 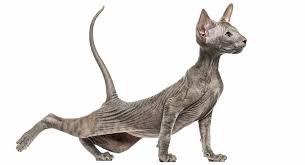 It was called at that time as Donsphynx by the city of Rostov-on-Don (bordering the river Don) where it originated and was discovered; nowadays in TICA, it is recognized with the name of Donskoy.

The Peterbald is a calm, affectionate, and very sociable cat. He loves caresses and pampering and needs constant attention from his owner. At home, he will adapt perfectly to family life, does not usually have problems with other animals, and will be very patient with children.

The cats of the Peterbald breed are medium size and are characterized by a unique combination of harmonious and well-balanced physical characteristics.

The animals of this breed have the peculiarity of having different degrees of baldness or lack of hair. They can range from the total lack of hair to the so-called brush hairs. Between one and the other, we find a variety of different lengths in millimeters of hair present. Unlike cats of the Sphynx breed, whose genes responsible for the absence of hair are recessive, in Peterbald the hereditary character of hair loss is dominant polygenic. This can be observed in heterozygous puppies that are born with mantle or some type of residual mantle that they lose over time starting with the crown or top of the head; while homozygous puppies are born completely hairless. In some cases and in some breeding lines, due to their characteristics, they are hypoallergenic.

The Peterbald, unlike the Sphynx, does not need a constant toilet. Its skin is dry, barely produces sebum so it will be enough to clean it from time to time with wet wipes or even, in times of heat, bald specimens can also be bathed. Your skin, lacking in the mantle, will need protection for cold and heat. For the cold, it will be enough to keep inside the house the temperature that we create comfortable for ourselves, around 21º, and shelter it if we had to move abroad. As for the heat, in the bald specimens the skin behaves like the human, it tans with the sun and returns to its original color with the passage of time. In specimens with mantle, the skin is not altered. 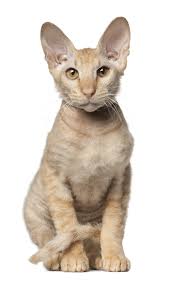 The Peterbald is usually a healthy and vital cat. So far, no characteristic condition is attributed to it.

Physical characteristics of the Peterbald cat

This elegant domestic cat can be absolutely hairless or have a very thin and imperceptible coat, from one to five millimeters. There are also specimens with hair that exceeds five millimeters.

Every so often, it is the case of some pussycat who did not inherit the baldness gene and has a normal mantle. As for colors, all varieties and combinations are allowed.

Other features that describe the Peterbald cat are:

Know the Character of the cat Peterbald

Calm, stable, affectionate, and very sociable are attributes that perfectly describe the character of Peterbald cat. It is an animal that constantly seeks to be caressed and pampered and, at all times, demands the attention of its owner. Most likely, I will follow him everywhere.

Sweet and kind, but also active and intelligent, this nice hairless usually shows interest in what happens around him and loves to play, particularly with its owner.

We are looking for an ideal kitten to live inside the house and that adapts without problems to the presence of other pets. In addition, he is usually very patient with the smallest of the home.

But if the home is without human presence daily and for several hours, the ideal is that this beautiful Morrongo has the company of another representative of the Felis catus. Or, failing that, of a dog. 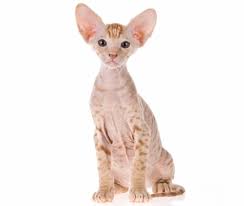 Protect this feline from cold and sun

Beyond the specific care of the hairless breeds, which should remain safe from the cold and the sun, the Peterbald cat does not require constant grooming, unlike other catless hairless breeds.

His skin, compared to other bald pussycat, produces very little sebum. Therefore, clean it with a few wipes. The veterinarian should indicate the most appropriate.

Other Similar Articles on Cats:

Anyway, if you want to bathe, you can also do it, especially in times of more heat. For this, it is convenient that you accustom it from small to water.

On the other hand, whenever you give quality food and according to your metabolism and comply with the vaccination and deworming schedule, your pussy will not present, surely, serious health problems. Their life expectancy ranges between 12 and 16 years. For more information check our Catsfud website.